For many Kinesiologists first encountering Chinese medicine, one of the greatest attractions is that it addresses the whole person, seamlessly integrating body, mind and spirit within its understanding of human health and disease.

Life is the organisation of the vital life force Qi, manifesting in body, mind and spirit through the Laws of Five Elements. The idea that all of nature is governed by yin/yang and the Five Elements lies at the heart of Chinese medicine.

The Five Elements, which are Fire (火), Earth (土), Metal (金), Water (水) and Wood (木), represent the fundamental matter in the universe. 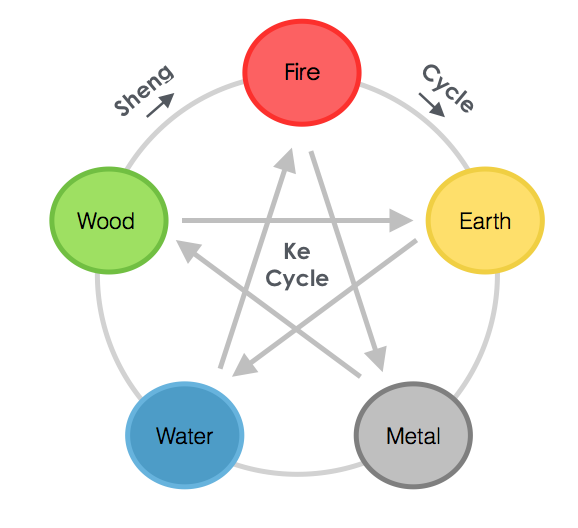 Like the seasons of a year are separate but still comprise the whole, the Five Elements are part of a ring of energy that encompasses body, mind, and spirit. The concept of blocks in the movement and balance of energy is the cornerstone of many traditional healing systems.

The goal of Five Element treatment is to enhance personal alignment with what the ancient Daoists called the Laws of Nature. When living in accordance with these Laws, the health of the body, mind and spirit is supported.

These Elements act as maps that reflect all levels of human function.

In the context of Kinesiology, the Elements correspond to a matrix of specific muscles, organs, glands, meridians as well as emotions, attitudes, virtues and behaviours. 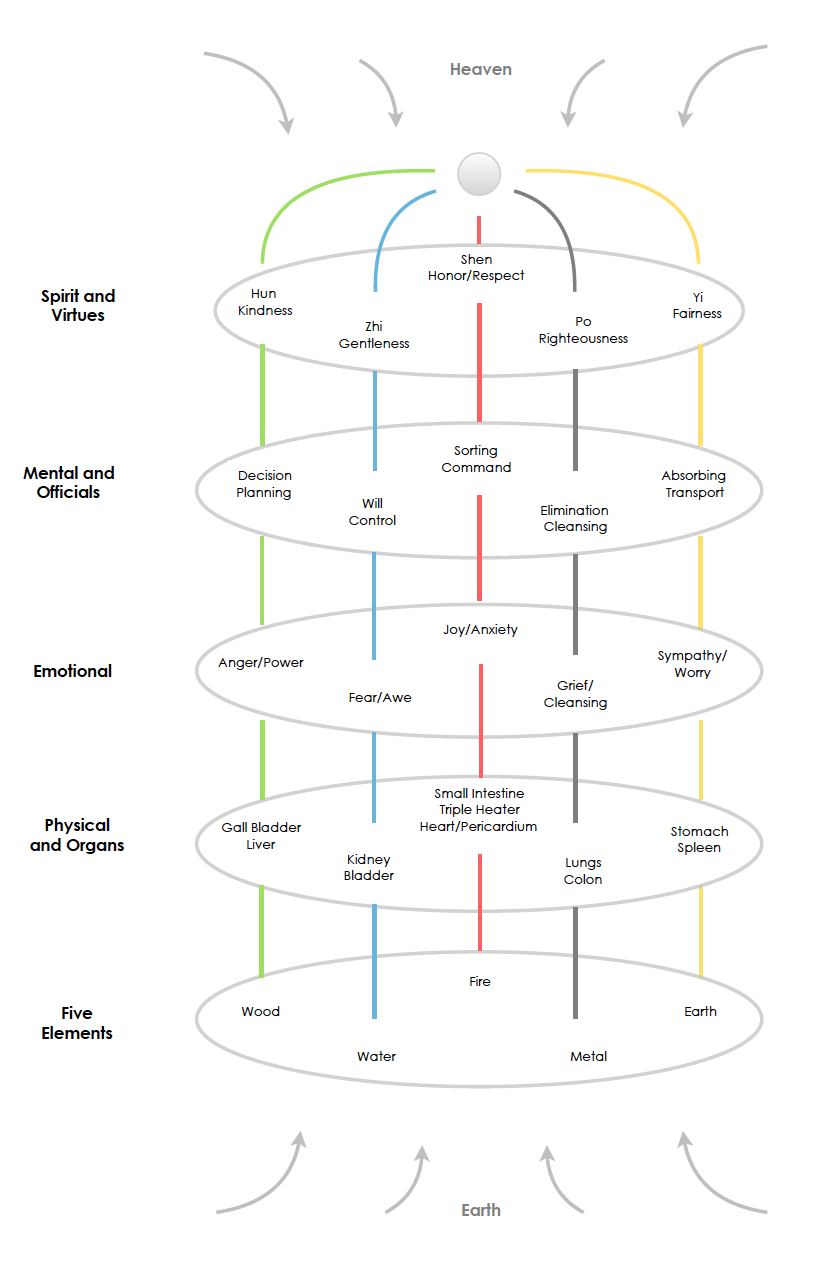 Each element corresponds to both a Zang (yin) and Fu (yang) organ.

The Qi of each Element is unique in its nature.

Yin corresponds to the organs that store Qi.

The yin organs are more stable and constant, representing more of the homeostatic mechanisms of the body. As they work with maintaining the body’s foundation, they’re both more consequential and more vulnerable. 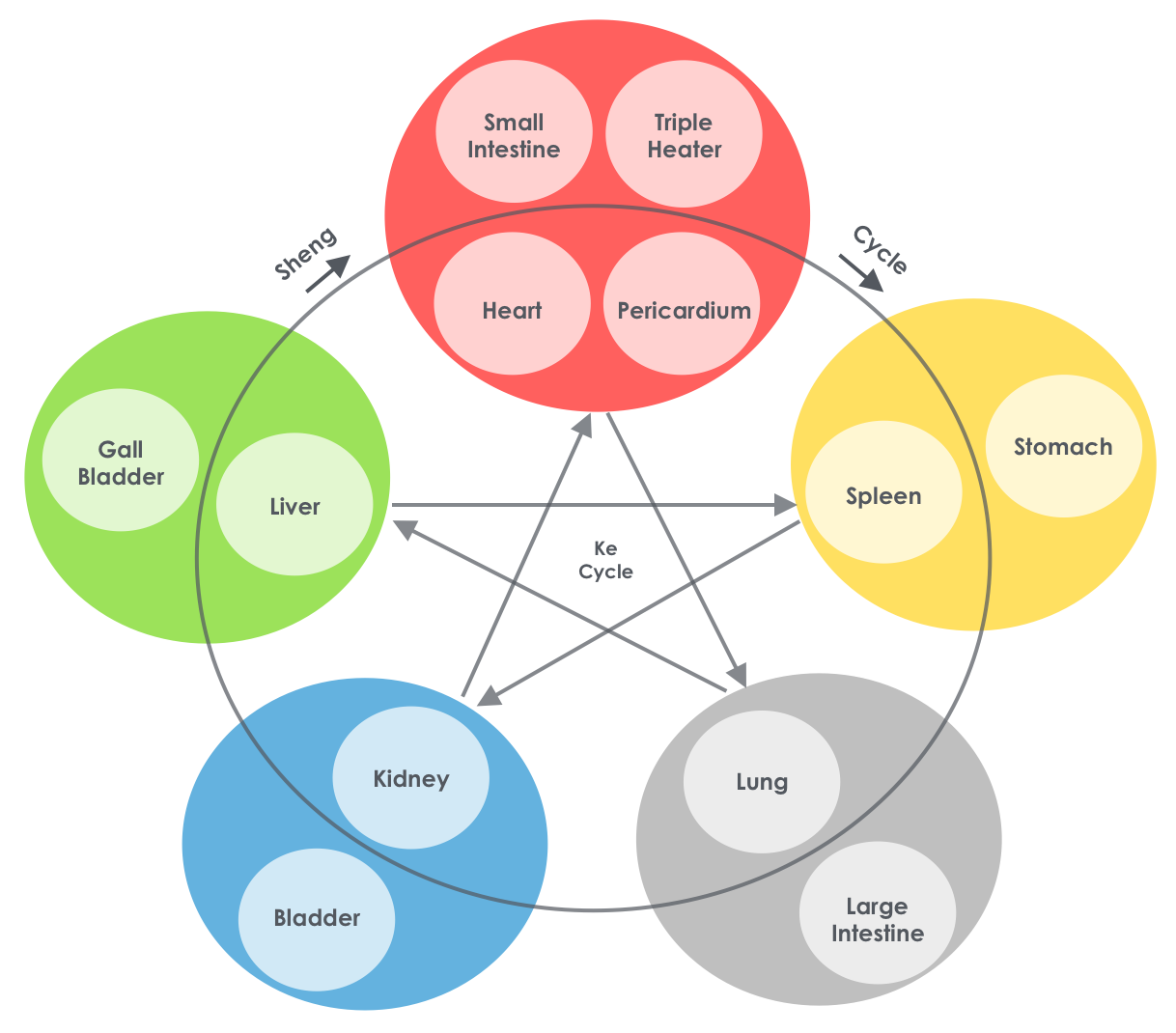 Diseases of these organs is considered deeper and more critical.

The function of the yin organs is to produce, transform, regulate and store fundamental substances such as qi, blood, and body fluids.

Clinically the Pericardium is the sixth yin organ, complete with its own respective meridian, but in general it is not distinguished from the heart. It governs the blood and protects the Heart from invasion by external pathogens.

When a clients Qi becomes either deficient (xu) or full (shi) within an Element, changes start to take place in various aspects of the physical body as well as in the mind and spirit.

Five Element BioEnergetics brings a vision and understanding of how to assess and treat the roots of an imbalance, whether on a body, mind or spirit level.

It also offers many therapeutic advantages being a non-invasive form of acupuncture.

In general, acupressure (针压) could be described as managing the body’s life energy, or Qi, by redirecting the body’s energy through a series of points on the body that form lines called Meridians.

Every part of the musculoskeletal system is related to a main meridian and its associated sub-meridians. 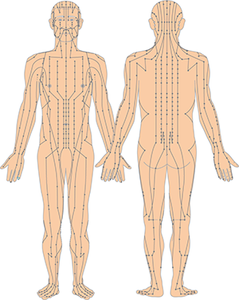 By stimulating an acupoint, the nervous system receives signals and responds by activating nerve or brain cells, releasing hormones, and influencing our immune system through chemical messengers.

This ‘pressure’ creates a transfer of energy throughout the body that also stimulates blood flow.

This is significant because everything the body needs to heal is in the blood, including oxygen, nutrients we absorb from food, immune substances, hormones, analgesics and anti-inflammatories.

In the healing model of Kinesiology we are looking to restore balance – although one condition may have multiple causes (imbalances), there may be one fundamental imbalance at the root of a seemingly complicated condition.

The pathways of the acupuncture channel system create the inner map of the body.

These pathways are the space where vital substances (qi, blood, and body fluids) are distributed.

Acupoints are functional sites along the meridian channels.

Acupoints have a unique vibration or ‘frequency signature’ through which an informational resonance passes through the meridians and internal organs to restore balance.

Learning these pathways is the key to understanding how to apply effective corrections in clinical practice.

Five Element BioEnergetics brings a vision and understanding of how to assess and treat the roots of an imbalance, whether on a body, mind or spirit level.

This includes how kinesiology, clinical acupressure and the therapuetic use of essential oils can be used to resolve difficulties and bring us to a place of harmony, health and resilience.